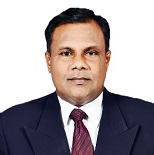 Mr. H.C.D.L. Silva is a member of Sri Lanka Accountants Service, schooled at De Mazenod College, Kandana. He earned a Bachelor’s degree (Hon) in BSc Management (Public Administration) from the University of Sri Jayawardanapura and a Master’s in Public Management in Project Management and a Diploma in Public Management from Sri Lanka Institute of Development Administration. Mr. Dilip Silva is an associate member of reputed professional bodies such as Charted Institute of Public Finance & Accounting (London) and the Association of Accounting Technicians of Sri Lanka. He has been registered as a Certified Business Accountant in the Institute of Charted Accountants of Sri Lanka.

After joining to Sri Lanka Accountants Service in 1992, he started his public service career as an Accountant at the Divisional Secretariat, Kolonna. Subsequently, He joined the General Treasury in 1994 and performed his duties as an Assistant/ Deputy Director at the Department of State Accounts and Department of Treasury Operations. During the period of 2006 - 2009, he gained experience in Sri Lanka Customs as a Deputy Director.

Mr. Silva was transferred back to the Department of Treasury Operations in 2013 as a Director & promoted as Additional Director General in 2018.

He has received several training and exposure opportunities in the fields such as Accounting, Financial Management, Public Debt Management, and Treasury Cash Flow Operations from reputed local and International Institutions or Universities. He has participated as a member of the delegation representing Sri Lanka on several occasions.